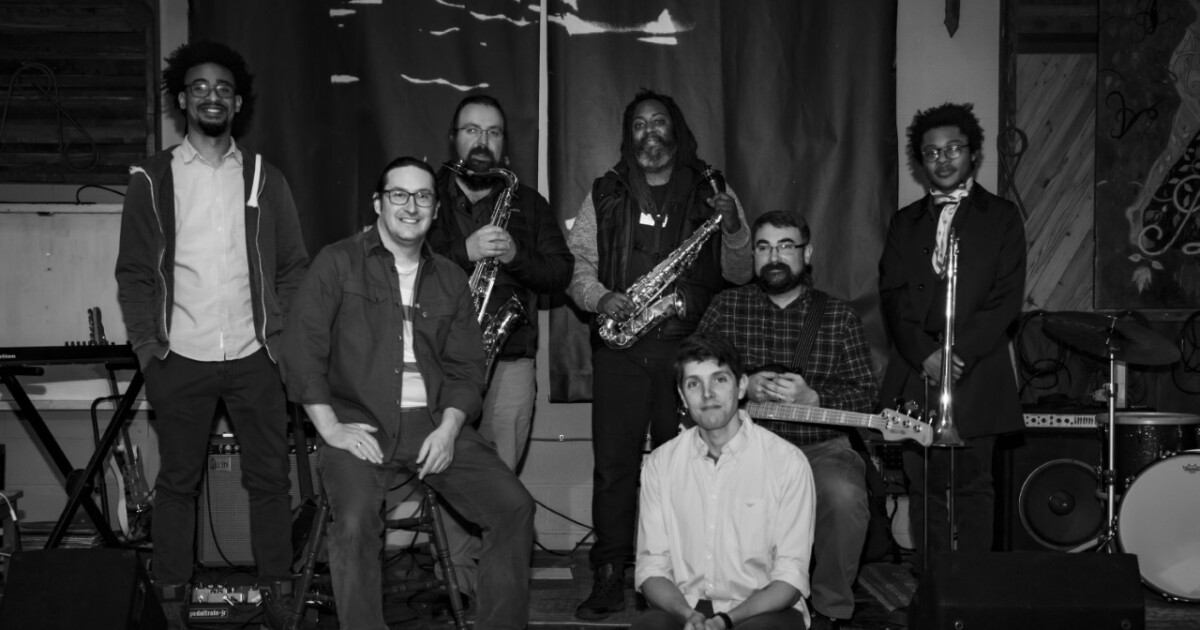 Dan Bruce’s modern jazz group, :beta collective, has taken on a new identity since its inception in 2015.

Bruce, born in Dayton but living in Chicago for over a decade, moved to Cleveland and reformed his musical collective to include notable jazz instrumentalists and performers from northeast Ohio.

The brand new collective :beta debuted at the BOP Stop in February and will release an album titled “Time to Mind the Mystics” on April 29th.

Bruce was a staple of the Chicago jazz scene and began mixing his fellow musicians from the original :beta collective with Cleveland artists he met upon his return to Ohio.

The current line-up of the :beta collective includes Chris Anderson on trombone, Chris Coles on alto and tenor sax and vocoder, Brad Wagner on soprano and tenor sax and bass clarinet, Will Wedmedyk on vibraphone, Aidan Plank on bass and Anthony Taddeo on drums and percussion.

The group stands out for its energetic and highly improvised performances, combined with all the original compositions.

The collective’s new album will capture the magic of the band’s concerts with an added element of new technologies and electronic sounds that Bruce began exploring at the start of the COVID-19 pandemic.

Formation of the Midwestern Jazz Collective

Bruce was born in Dayton and attended college in Texas. He and his wife later moved to Chicago, and Bruce, a trained guitarist, became heavily involved in teaching and performing in the city’s jazz community.

He started :beta collective as a six-piece jazz ensemble, and in 2018 the band went on tour in support of their debut album, “Earthshine.”

That same year, Bruce and his family decided to move to Cleveland, where the cost of living was not as expensive.

As he moved from town to town in the Midwest, he began inviting musicians from Cleveland to support :beta collective while on tour.

“On parts of this tour was Theron Brown [and] Chris Coles from here. But also, you know, the trumpet was Chad McCullough from Chicago. There were a few other Chicagoans from there and just a lot of Chicago-Cleveland connections there. So it became a good stepping stone back to when I was here full time,” Bruce said.

When he moved to Cleveland, there were already several musicians who had played the music of the collective, so he was able to complete and expand the group.

“We kind of walk a fine line between very composed music, where all the details are sort of there for you, and free improvisation.”

“I try to get as much sound as possible from the people I have without having a 20-piece band because it’s ridiculous,” he said. “Or, you know, very difficult to deal with, I guess.”

Bruce composes the songs for the :beta collective, but the band’s sound is known to be highly improvised in the spirit of the jazz tradition.

“We kind of walk a fine line between very composed music, where all the details are sort of there for you, and free improvisation,” he said.

The musicians strive to combine these two ways of playing in their songs, mixing something established in advance with places that are a mystery as to what will happen next.

“For me, that’s the most exciting thing as a performer,” Bruce said. “As I got older, it’s like I realized that I also wanted people to like the music without having to understand it.”

Bruce wants the collective’s music to be “rhythmically relatable”, where the pulse of the song isn’t hidden, while what’s happening above can be sonically complex.

“My hope, and I think what I’ve found, is that it makes it much more easily accessible if you can kind of tap your foot, or at least keep in tune with the pulse that we feel on stage “, he said.

Bruce composes songs for the :beta collective with each player’s unique musical identity in mind.

He said the performers bring a level of risk and spontaneity that adds flavor to what he wrote on the page.

The mix of free improvisation and fully composed music to a distinct groove is what makes the jazz band sound unique and easily identifiable.

Bruce debuted with the Cleveland collective’s lineup earlier this year to a packed house and presented four new works at the event.

As a songwriter and performer, Bruce said he loves that his band can morph and have different “colors” that pop out when the artists play.

These colors differ wildly from room to room, he said, creating elements of surprise for the listener.

“I listen to colors more at least at first, like broad swaths of colors than even really details of music when I first hear music,” Bruce said.

Often the songs that Bruce composes begin with a story. Sometimes he will think of a scene or a setting, as if he were composing the music for a film.

He will associate this visualization with a certain feeling.

“I can sit at home and visualize, or in my head, I can hear so many different textures that it’s very inspiring when I try to write,” he said. “So it was really fun trying to think like soundscapes.”

Recently, Bruce has started experimenting with effects in post-production to add new layers and textures to the collective’s songs.

“I love being able to change my sound from song to song and have something that I think can go better with the vibe of the song we’re about to play,” Bruce said.

The group entered the studio during the first three months of the COVID-19 pandemic to record an album.

The recording was put on hold due to widespread lockdowns and shelter-in-place orders.

The musicians had played the music a decent amount before the recording sessions, so they sat on the gear for a while.

This gave Bruce the opportunity to reinvent the songs.

“My joke to some people was that it had become my ‘Pet Sounds’ to some degree because I started thinking, ‘Well, I could add this, or I could add this, or what about of this?’ So in some ways it became a bit more like a rock album where I thought of some things that we could layer in post-production,” Bruce said.

He got into electronic music during the pandemic and started programming in Ableton Live.

In post-production, he layered electronic elements over the acoustic instrumentation to create a rich new sound.

A cornerstone of the collective is that after playing their songs for a while, parts of it will develop into something new and different.

“We’ve been playing this music for a long time, and I’m really happy about that because I think when I’m writing, my writing is a starting point,” he said. “And then I put that in front of these musicians, and the reason I like playing with these musicians is because every time we play the song, it grows a little bit and maybe the limits are pushed back a bit.”

Release an album with rich themes and textures

The collective’s new album, “Time to Mind the Mystics”, revolves around Bruce’s interest in technology.

The idea of ​​looking to the future, in terms of technological advancement, coupled with holding on to one’s past became a prevalent theme in his writing.

“I think for everything we kiss, it should be in favor of our humanity,” Bruce said.

Although there is a lot of technology used on the album, some aspects of technological progression can be concerning, he said, especially when thinking about future generations.

“For me, the ideal is at least musically, we use this technology in the hope that if you come and see us live,” he said. “I talk about it a lot on the shows, you actually share your humanity with us. And by humanity, I mean, as an expression of what we have that no other species on Earth has.

Technology should help us be human together, he said.

While the eight-track album is instrumental, Bruce said listeners can pick up the inspiration and themes he had in mind by reading the liner notes.

“The reason I like playing with these musicians is that every time we play the song, it grows a little bit and maybe the boundaries are pushed a little bit.”

The album’s title track expresses Bruce’s excitement to be alive and experience the magic of music.

“And this track, there are synths on it. I play through a ring modulator, which ends up looking like a robot half the time,” he said.

To juxtapose, there’s a song on the album called “Slant” which was developed in 2016 as Bruce reflected on the presidential election.

“The idea has become, everyone has a different approach to things or a different view of things, and we start holding on to them so much that we can’t interact with each other,” Bruce said.

Bruce took the song and set it in the “not too distant” future. There’s a therapist character in the song, which ends up being an algorithm.

“To me, it’s just kind of dark humor from someone talking with an algorithm about how to connect better with humans. But I could see we weren’t that far off from that,” he said. he declared.

Audiences will have the opportunity to experience human connection and see :beta collective perform live at an album launch concert for “Time to Mind the Mystics” at 7 p.m. on April 28 .

The performance will take place at the Negative Space Gallery, located in the second floor warehouse at 1541 E. 38and St. in Cleveland.

The show is free and copies of the collective :beta album will be on sale at the event using a “pay what you want” model.

Bruce said the collective will feature rotating vocalists on future shows, and the next phase of the group with vocal arrangements will be called beta plus.

The group will also perform at the Rubber City Jazz and Blues Festival in September.