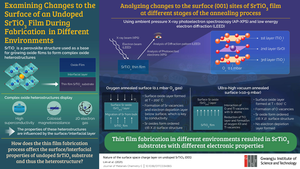 As our lifestyles take root in flexible electronics, smart devices, artificial intelligence, Internet of Things, and more, high performance electronic components capable of collecting, processing and executing data at high speed become a necessity. Some perovskites are crystal structures that may be promising alternatives to silicon-based components for these next generation electronic applications. Their cubic-type lattice makes them ideal for use as a base for growing oxide films to form heterostructures with unique electrical properties. The properties of these heterostructures depend on the charge transfer in the interfacial layer between the perovskite substrate and the oxide overlayer. This charge transfer can be manipulated by doping or by the manufacturing process.

for a particular perovskite material, SrTiO3—One of the most popular substrates for growing oxide films — affects its undoped surface and the resulting interfacial layer of the heterostructure. By using an undoped surface, the researchers wanted to examine the changes that occur on the surface of the substrate without interference from dopants. “The presence of doping can interfere with the correct interpretation of surface defect states, which can be critical in understanding the electrical properties of heterostructures. Our study on undoped SrTiO3 provides impartial features of SrTiO3 substrate ”, explains Professor Mun Their findings were posted online on September 16, 2021 and published in volume 9 number 38 of the Journal of Materials Chemistry C.

In the oxygen environment, an electron depletion layer formed when the Sr atoms in the substrate migrated to the film surface to react with oxygen and form a stable oxide layer. In the low pressure oxygen deficit environment, the formation of such a depletion layer was limited because the oxide layer had formed due to the reduction of TiO.2 layer that generated electrons.

In both environments, a similar oxide layer formed, but the electronic properties of the structure differed because the electron depletion layer is the key to the conductivity of the structure. “Our work clearly shows how the electrical properties of devices can be adjusted by adjusting the electron population near the surface region, which is a very fundamental and important result indicating that future electronic devices can be made with material characterization. at the atomic level, ”explains Professor Mun. “In the long term, our study on SrTiO3 will establish a solid foundation for advanced electronic devices that will enable us to have a better lifestyle.

About Gwangju Institute of Science and Technology (GIST)

Gwangju Institute of Science and Technology (GIST) is a research-oriented university located in Gwangju, South Korea. As one of the most prestigious schools in South Korea, it was founded in 1993. The university aims to create a strong research environment to stimulate scientific and technological advancements and promote collaboration between research programs foreigners and nationals. With his motto, “Proud creator of the science and technology of the future, ”GIST has consistently been awarded one of Korea’s highest university rankings.

Bongjin Simon Mun is professor of physics and photon science at the Gwangju Institute of Science and Technology in Korea. His main research interest is to understand the correlation between chemical surface reactions and electronic structures under various reaction conditions. Mun has been actively involved in the development and application of ambient pressure x-ray photoelectron spectroscopy. Before moving to Korea, Mun worked at Advanced Light Source as a scientist. After obtaining a doctorate. in Physics from the University of California Davis Under the supervision of Professor Chuck S. Fadley, Mun completed his postdoctoral training at the Phil Ross Group of the Lawrence Berkeley National Laboratory.

The title of the article

Nature of the surface space charge layer on undoped SrTiO3 (001)

Publication date of the article

Disclaimer: AAAS and EurekAlert! are not responsible for the accuracy of any press releases posted on EurekAlert! by contributing institutions or for the use of any information via the EurekAlert system.