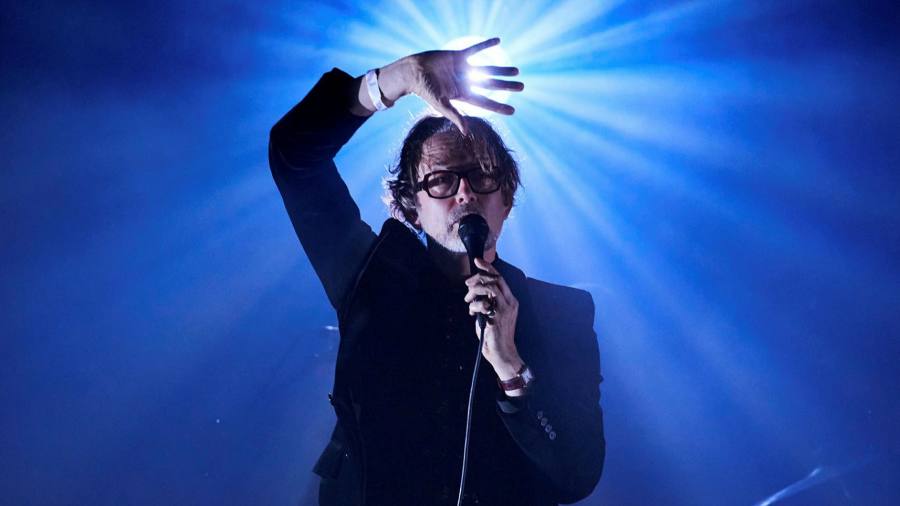 “We’ve got all night to get to know each other again,” Jarvis Cocker said at the start of his band Jarv Is’s Roundhouse show. He phrased it as a comedic conversation line, with a raised eyebrow rather than an adventurous gaze. , his arm resting on the microphone stand as if it were draped over a fireplace. With his glasses and 1970s suit, a dialectical contrast between a slim fit and flares, the former Pulp frontman cut a reassuring and familiar sight – an incredibly groovy polytechnic lecturer leading the most popular course on campus. .

The show had been rescheduled from May 2020, when Jarv Is was forced by the pandemic to cancel the tour accompanying the release of their debut album. Go too far. Mixing archaism and savagery, psych-rock abandonment and sophisticated rhymes, his songs are Cocker’s best since the Pulp days. But a somewhat muted atmosphere illustrated the difficulty of picking up the thread of an interrupted conversation.

They opened with a cover of Pulp, “She’s a Lady”, from the band’s groundbreaking album Sheffield in 1994. His and hers. Cloudy red lighting, a punchy snare, and fake synth riffs accompanied Cocker’s tale of filthy libidinous desire, a sardonic overhaul of Gloria Gaynor’s break-up hymn “I Will Survive”. “Yeah, I guess I missed you a bit while you were gone,” Cocker intoned at the end.

“House Music All Night Long” was Jarv Is’s first song of the night, one of many to be performed with guest singer Naala. The music was solid dance-rock, less scintillating than Cocker’s rhymes between “claustrophobia” and “undress”. A new song followed with the working titles of “Slow Jam” or “Bad Friday,” a slow number that finds its groove as it progresses. Another novelty, “Aline”, a cover of a 1965 French hit by singer Christophe, which Cocker sang with unbridled Gallic drama. It appears on its soundtrack of the new film by Wes Anderson The French dispatch.

His bandmates Jarv Is – Serafina Steer on keyboards and harp, electronic musician Jason Buckle, drummer Adam Betts, bassist Andrew McKinney and Emma Smith on violin and guitar – formed a curved line across the stage. . Cocker took out his stage moves, a sort of vogue in a corduroy jacket with extravagant armography and smoothing shapes, only hampered by monitors and gear. His vocal flamboyance, a display act ranging from sonorous voiceovers to possessed gasps and screams, was toned down by rather understated amplification.

The best moments were like a switch on. “Sometimes I Am Pharaoh” was a powerful drone-rocker that relied on a sudden hiatus before exploding again into life. “Swanky Modes” based a bittersweet act of Pulp-like observation around an old clothing store on a street near the Roundhouse (store owners, in attendance, received a shout from Cocker Spaniel). “Do I have to evolve? Was a comedic epic linking rock art to acid house raves, with Smith and Steer as the warning chorus. During an at times hesitant evening, his evolving message resounded clearly: life goes on.