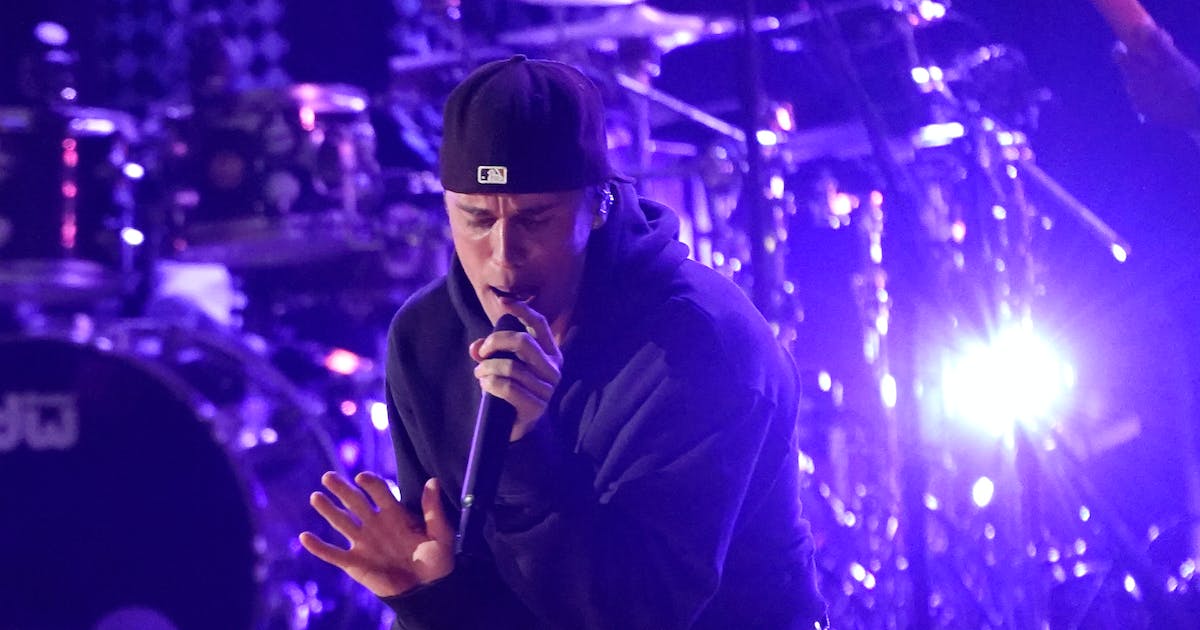 He didn’t walk on water, but he danced on lava, levitated above the crowd and talked a lot about loving God his Father.

No, it wasn’t the Second Coming of Jesus that wowed a sold-out crowd Friday night at Target Center, but rather Justin’s long-awaited return.

Bieber, that is, who was scheduled to hit Minneapolis in 2020 on his Justice Tour. We all know the injustice that made it happen two years late.

During the interim, it seems, the 28-year-old Canadian pop singer has become a staunch Christian and a more stable, less party-loving young adult. However, he hasn’t grown much as a performer yet.

Bieber’s set began with a butterfly-filled new-age video in which he repeatedly pledged his faith with lines like “I’m convinced God is in control.” The Christian motif continued throughout the hour-and-a-half show: Neon pink crosses took to the stage during “Holy”; another pre-recorded mid-concert video highlighted “God’s belief in you”; and during the encore he gave a long speech about “meeting a man born in Bethlehem”.

Incidentally, that last pitch came just before he sang about his “bad-ass b****” in the recent mega-hit “Peaches.”

On the production side, Friday’s concert was truly divine. The lava dance trick happened thanks to the stage itself being a giant video screen, which rolled into a U behind the stage. He also rode atop a plane for his arrival in the opening song “Somebody,” and he sang at a fake bus stop with a streetlight for a three-song acoustic montage featuring the mega-hit. “Love Yourself”.

Performance-wise, Bieber seemed more invested on Friday than at his previous Target Center gig in 2016.

It was hard to tell through all the electronic augmentation how much effort he put in as a singer during new tracks such as “Deserve You” and “2 Much”, but he convincingly showed his pipes in the acoustic tunes and some rawer tracks. -sound numbers such as “Sorry”.

“Sorry” was one of the songs he worked quite hard on as a dancer, driven by his impressive 16-member cast. Perhaps his most spirited gesture of the night was giving a speech on the track “Justice” from his album and tour, which sounded fitting for the city of George Floyd’s murder.

“There is so much division and racial injustice,” he preached. “Racism is evil and evil. You and I are becoming agents of change.”

It’s a shame that very little of Bieber’s music on Friday reflects the era or his deeper new balance.

After some of pop’s hottest young newcomers arrived in the Twin Cities in recent months, delivering songs with meaningful messages and authentic emotions – including Olivia Rodrigo, Billie Eilish, Dua Lipa and Conan Gray – it was hard to put up with a lot of lightweight Bieber gear; especially since he is no longer so young himself.

“Good faith stallion / Ain’t in a stable / You stay on the run / You’re number one,” he sang in “Yummy,” likening his love interest to a horse as he repeated the word “yummy” about 900 times. And then came Peaches and her wildly exciting lyrics.

Mind you, these are songs on Bieber’s 2020-2021 albums, not silly fluff left over when he was 16. He did some of those tracks, too — like “Baby,” which came just before the encore and found a man now married to a model so sadly singing about a breakup at 13. Time to move on, Biebs.

The third of three fast-shot opening acts on Friday, Jaden offered the kind of sunny, airy aesthetic found in his father Will Smith’s hip-hop tunes before he became an Oscar-winning (and now Oscar-banned) actor. Jaden never mentioned either his father or mother, Jada Pinkett-Smith, but he did address the man of the house the Timberwolves call home.

“Make some noise for my man Karl-Anthony Towns,” he shouted, earning almost as much applause as Bieber’s many cries to Jesus.