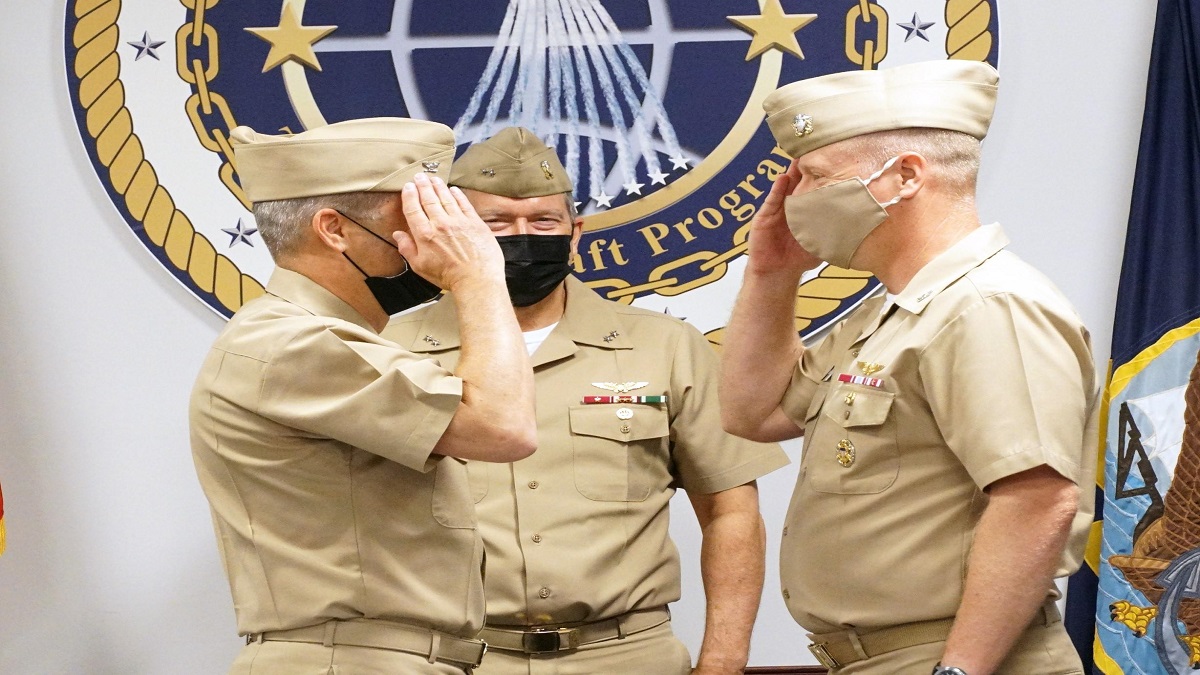 Rear Admiral Shane Gahagan, program manager for tactical aircraft programs who presided over the ceremony, praised Orr for his ability to navigate the program office in extreme environments.

“I am incredibly proud of the work that Captain Orr has done in leading this program office over the past few years,” said Gahagan. “He has been a tremendous asset to his team, PEO (T) and Naval Aviation. His hard work and dedication is directly reflected in the progress the PMA-234 has made in increasing naval readiness by improving processes and bringing new capabilities to the fleet.

Under Orr’s direction, the program office retired the Prowler EA-6B; established the Joint Program Office with the Royal Australian Air Force; received approval from the Next Generation Jammer (NGJ) Mid-Band to enter the production and deployment phase and proceed to initial low-throughput production; and awarded the engineering and manufacturing development contract for NGJ Low-Band, which was just a concept when he first took command.

Orr, who graduated from the US Naval Academy in 1995, was selected to fly the EA-6B Prowler outside of flight school and has spent his entire operational career supporting the Electronic Warfare (EW) mission.

With characteristic humility, Orr professed how his time spent with the program was an “experience of honor and humility” and then took a moment to thank the participants, including Scott Dailey, Senior Assistant Director of the PMA Program. -234, and his family for being his inspiration and motivation. .

“Leading the men and women of PMA-234 for the past four years has been the greatest honor of my professional life,” said Orr. “I’m so proud of what this amazing team has done to support the EW fighter and I can’t wait to hear the even bigger contributions they will make in the future.”

After Rueter officially took the reins of the AEA program office, he took a moment to recognize his predecessor’s success.

“I cannot thank Captain Orr enough for the exceptional leadership and accomplishments he has brought to the PMA-234 and the airborne electronic attack community over the years,” said Rueter. We are a more capable Navy and Nation because of his dedication. “

While on shore duty, Rueter served as the Flight Test and Evaluation Squadron (VX) 23 Project Officer for EA-6B and EA-18G. In 2016, he reported to the F / A-18 and EA-18G (PMA-265) program office, acting both as the team leader of the Growler EA-18G integrated systems program and as the manager. Assistant Program Officer, which uniquely prepared him to lead the 1,100 membership at PMA-234.

Most recently, Rueter served as Executive Assistant to the Principal Military Deputy, Assistant Secretary of the Navy (Research, Development and Acquisition).

Rueter concluded with a message to the PMA-234 team with whom he will share the next four years: “I am honored to join this incredible organization and look forward to continuing to advance the force’s electronic attack capabilities. joint forces ”.

The PMA-234 is responsible for the acquisition, delivery and maintenance of AEA systems, providing combat commanders with capabilities that enable mission success.