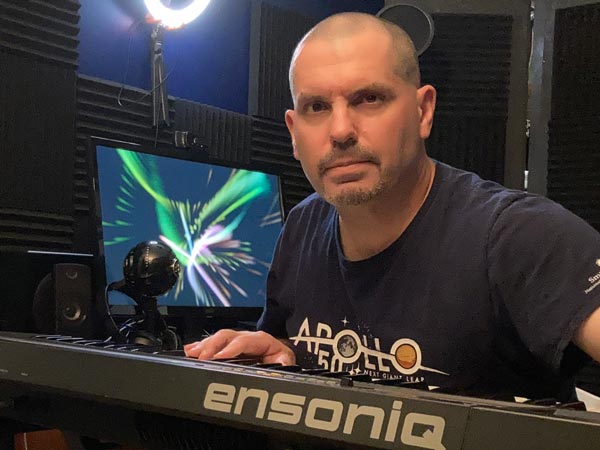 Fierce designs, the music project of central New Jersey-based songwriter Brian Kelley released their debut EP, A matter of time, a collection of five songs that Kelley has recorded over the past few years. The EP is available now through Bandcamp and will soon be on most streaming / download services through DistroKid.

A matter of time features five songs that Kelley has recorded as demos with GarageBand over the past decade, and has done some cleaning up for this release. “Between the pandemic and recently turning 50, I just thought it was finally time to put some of my songs in a reasonably ready state for release – to the best of my limited ability, anyway – and put something in the world. “

Although he has spent most of the past 35 years as a songwriting enthusiast, Kelley is no complete stranger to the New Jersey music scene. He collaborated with the singer-songwriter Christian beach in a band in the late ’80s and early’ 90s that performed several times at the long-gone Green Parrot Rock Club in Neptune, New Jersey. Kelley has played keyboards, accordion, and percussion in Beach’s backing band since 2007, playing a number of iconic Jersey Shore venues in the process, and also recorded with Beach.

“My business is completely different from Christian’s, of course,” Kelley said. “My personal musical style has always tended to be more electronic, pop and prog.”

Kelley said he used the project name Ferocious Designs because it was a song from a song by Marillion – “Cover My Eyes (Pain and Heaven)” – which has always been a name for him. group possible. “Plus, the guy from Florida Georgia Line who has the same name and spells it the same exact same way just released a solo EP this year, so I wanted to clear up any confusion.”

The main track, “What a Time to Be Alive,” was written in January 2020 in response to the debate on climate change. But then the pandemic struck and the words took on a whole new meaning. “I’m listening to it now and I forget it wasn’t written about the pandemic because the lyrics still apply, maybe even more,” Kelley said.

The second track, “Get Back into Line,” was originally written in reaction to the Tea Party-led federal government shutdown in early 2013. Sadly, the lyrics still resonate today. “Musically, I wanted something a little bit cold and austere,” Kelley said. “I had just seen Midge Ure live for the first time in ages in January 2013, and I think you can hear a hint of Ultravox’s classic ‘Vienna’ in the overall mood of the song.”

“Years Go By” is the third track by A matter of time and serves as a false title track. It’s also the most accessible song on the EP. “I wrote this in 2019 and it’s literally about my anxiety about class reunions,” Kelley said. “I’m generally a nostalgic person by nature and love the idea of ​​reminiscing with old friends. However, I probably don’t have anything in common with these people anymore, so it’s probably best to just leave those memories in the past. Musically, the song was originally inspired by Tame Impala’s “Patience”. “I listened to this a lot at the time and wanted to try writing something like that,” Kelley said. “But I’m not Kevin Parker, so I never really got to this point.”

The EP’s fourth track, “Lay It on the Line,” began in collaboration with former Kelley’s Technology and the Arts podcast co-host John LeMasney. “During the last season of the podcast in 2015, John and I were going to spend most of the series working on a song for viewers and listeners to follow,” Kelley said. “The original idea for the song came from this project, but it was really just a chorus that I wrote and a verse that I built around a guitar riff that John came up with.” The lyrics were inspired by the Black Lives Matter protests in the aftermath of Ferguson in 2014. “The combination of the pandemic and the broader BLM protests around the world following the deaths of George Floyd, Breonna Taylor and Ahmaud Arbery in 2020 led me to revisit and finish the song, ”Kelley said.

Advertise with New Jersey Stage for $ 50 to $ 100 per month, click here for more information

“You and Me Against the World” is a radical 8 minute song about a couple who overcome a number of challenges. “I had read about the victims of the 2018 camp fire in Paradise, Calif., And how they were essentially trapped by the flames, the geography and flawed city and emergency planning,” he said. Kelley said. “And the song envisioned a couple who might be on the verge of breaking up, but now had to work together to escape and survive. However, it got very dark very quickly, so the couple rallied instead to take on various unknown outside forces working against them. Musically, it is inspired by Keane and Lo Moon, in particular their late 2018 single “For Me, It’s You”.

Fierce Drawings – A Matter of Time

All songs written, performed, programmed, produced and mixed by Brian Kelley, except: