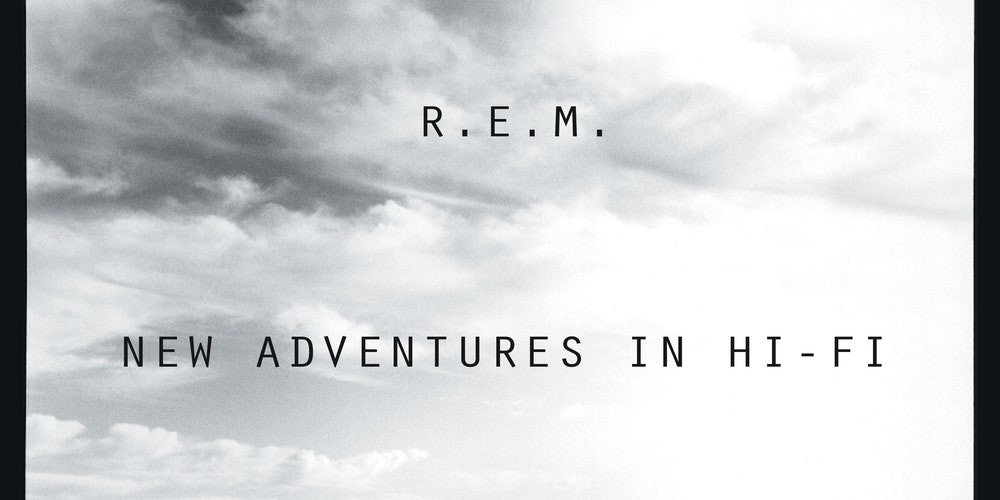 When is a group officially cursed? REM’s 1995 world tour, a grueling 11-month stint that was also their first tour in six years, certainly made them seem like that. During a concert in Switzerland, drummer Bill Berry suffered a brain aneurysm and collapsed on stage. A few months later, when Berry had recovered enough to perform with the band again, singer Michael Stipe and bassist Mike Mills each had to undergo surgery for different illnesses. Somehow not completely overcome by the experience, the band entered the studio as soon as the tour was over, excited to finish an album they had stubbornly started during the poorly played trip; they had captured new songs during the scales and performances and during the dark hours between them, hoping that the music would convey not only the energy of their shows, but also the ephemeral and unreality of life on the road.

One song, “Be Mine,” was written and recorded on a tour bus in the middle of the night, and the original recording is included on the bonus disc of the 25th anniversary reissue of REM’s 1996 album. New adventures in Hi-Fi. While the version on the record ended up being a full-fledged studio recreation, it’s the recording of the bus that channels the half-asleep and delayed consciousness of time and reality brought on by a long car ride to through nowhere. You can hear him in the stillness of Stipe’s voice, singing like he’s trying not to wake anyone up, accompanied only by Buck’s guitar, the hum of an organ, and the sounds of the bus moving through a world upside down and emptied of people.

New adventures is REM’s most out of place record, never quite arriving in a single sound for more than one track at a time, buzzing through a harsh, ruthless landscape like wires between electricity pylons. The material is only unified by the state of half-consciousness in which much of it was made, where a song as muddy and slippery as “Undertow” can hang by the twilight glow lit by an “E’s lamp. -Bow the Letter “. Most of the album and its B sides were taken from or built on recordings from the ’95 tour; “Cither,” a short sparkling instrument that could accompany a weak figure strolling down a desert road, was recorded in a bathroom at the Spectrum Arena in Philadelphia, and the record’s most furious and punk compositions, such as “The Wake -Up Bomb “and” Departure “, sound like lightly cleaned up live recordings. As quickly as REM was engaging in new tape work, they were also stretching, covering Jimmy Webb songs like” Galveston “and” Wichita Lineman “- the latter appearing on the new reissue – looking for records that also seemed to be pulled from the wavering air of the road. New adventures, these songs embody the feeling of driving through vast expanses of nothingness, eagerly awaiting the arrival of the next moment for the present moment is intolerable.

This aspect of the road also permeated Stipe’s words; all the obsession with the image and artifice in the Monster the era is dissipating in a desert of abstraction on New adventures. “That celebrity thing, I don’t understand / wrap my hand in plastic to try and look through it,” Stipe sings on “E-Bow the Letter,” the album’s first single and such a lonely thing. and alien than REM ever recorded, Patti Smith’s voice gushed like tears in the chorus. Stipe’s writing throughout the album is made up of disconnected phrases that seem detached from anything bigger, like the fragment of CB radio chatter that spread across the tape when they recorded “Be Mine”. The words proceed from a nameless and singular mood, a fragmented insomniac haze where all the efforts of life seem to boil down to a shadow sliding across an uninhabitable desert. Although it was written quickly in the studio, the opener, “How the West Was Won and Where It Got Us,” feels haunted by the tour, a messy sequence of dramatic events that Stipe keeps blurry: “I made a mistake / I chalked it to design / I cracked through space-time, godless and dry. And when Stipe writes in character, continuing a tradition he started on Monster, the songs are full of people trapped in runaway states, ricocheting between feelings of frustration and loss that religion and its alternatives cannot fully mend. One of his most tender and ambiguous sets of lyrics, “New Test Leper,” is told from the perspective of a talk show guest going through a half-hearted religious conversion or nervous breakdown, trying desperately to be heard in a room where hostile and embarrassed responses from host and audience are so inevitable they might as well be scripted.

At the center of the record is “Leave,” the longest song in the REM catalog, where Stipe’s vocals sound as though she’s struggling to be heard amidst a torrent of sirens and overdriven guitar riffs, while ‘an e-bow, a guitar effect used throughout the record, vibrates a sound of Buck’s strings that floats in the air with the eerie shimmer of car exhaust. Stipe’s lyrics are even more fragmented in this section of the record, as if obscured by swirls of statics: “Move the dream / Nothing could take me away from my old friend’s time.” An alternate version of the song, released on the soundtrack by A less ordinary life in 1997 and also included in the new reissue, reduces it to a sleepy trip-hop impulse, a photonegative of the original with all of its darkness and light reversed. It’s like trading the loneliness of a crowd for the loneliness of an empty room – these are just variations of a single alienation.

Affixed to their roughest and most unstable record, the title New adventures in Hi-Fi always felt a little sarcastically posed. It might have been better served by a track from a previous REM album, Document, as it is undoubtedly a document from the 1995 tour and the exhausted but inspired band that they were afterwards. The reissue hammers this house by incorporating several first live versions of album tracks that are fascinating as they are just a few lyrics missing from their final incarnations; they display the group’s confidence in the material, in what they have managed to create chaos and disaster.

New adventures is also a document of a group which effectively ceased to exist after its registration. The first day of sessions for their 1998 album UpBerry, unwilling to endure the touring routine after his aneurysm, decided to quit, and the remaining members had to reshape their sound due to the absence of their founding drummer. They would do so by bringing in electronic textures and Beach Boys-influenced harmonies, both in their tributes to Berry, the post-punk leap he placed in the band’s pulse, and the chamber music constructs that he did. he brought to their writing. But for all the individual merits of the REM albums after New Adventures in Hi-Fi, for better and often for worse, they were never the same.

(Pitchfork earns a commission on purchases made through affiliate links on our site.)

Catch up with every Saturday with 10 of our top rated albums of the week. Subscribe to the 10 to Hear newsletter here.