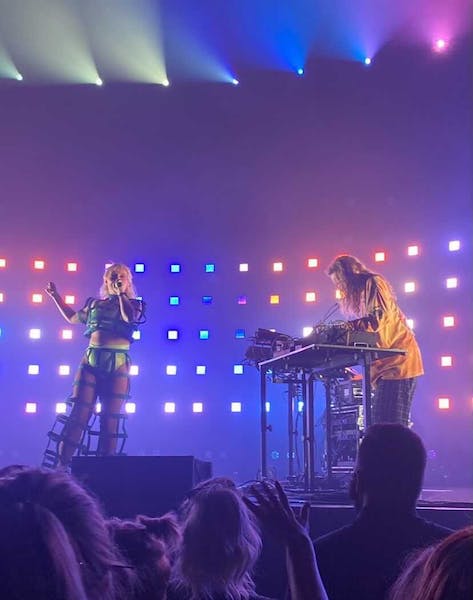 Pimienta’s music is influenced by indigenous and Afro-Colombian styles, and it combines these influences with electronic beats to create music unlike anything I’ve heard before. His synthpop songs not only sound surreal, but many of them also address the flaws of our failing society. As a queer woman of color, many songs by Lido Pimienta recall her experiences in a misogynistic and racist world.

Depending on the song she was singing, Lido Pimienta’s angelic voice echoed with notes of assurance, anger, love or any other emotion felt by the singer. It was extremely easy to decipher his emotions due to his expressiveness. For viewers who didn’t speak Spanish, Pimienta punctuated his songs with a few translations, and also offered explanations of some of his songs before starting them. Pimienta was one of the most talented live singers I have seen, and I highly recommend listening to her music. It’s a crazy experience, and your ears will thank you.

After Lido Pimienta’s supernatural performance, Sylvan Esso took the stage. The electronic indie-pop duo includes Amelia Meath and Nick Sanborn, both from Durham, North Carolina. Amelia’s outfit, like all other parts of the night, was perfect. She looked like a real badass. She donned a bright yellow bra top and bottom, with an intricate black mesh shirt and pants over them. This outfit choice gave her an almost futuristic and surreal look, which complemented the band’s electropop songs perfectly.

Behind Meath, the stage lights swayed to the beat of the songs and changed color throughout the night, creating a breathtaking backdrop that perfectly complimented Sylvan Esso’s songs. The light show elevated an already perfect night, getting audiences to dance and move with Meath. Everyone felt connected. While Amelia sang and danced, Nick took care of the keyboard, providing the rhythms of the night. He also had fantastic energy, accompanying Amelia with every song. Their energy was overwhelming.

Amelia Meath danced with all her heart the night away and the crowd danced with her. His catchy songs like “Radio” and “PARAD (w / m) E” made the audience dance and wave their fists to the beats Sanborn was producing. His slower songs like “What If” and “Die Young” rocked the audience, singing softly and absorbing the beautiful lyrics offered by Sylvan Esso. I would not have spent my Friday night elsewhere.

Amelia Meath and Nick Sanborn’s group name, “Sylvan Esso”, was inspired by a character from a game they both love called Sword and Sorcery. The duo not only create stellar music together, they also happen to be married! This is something I didn’t know until dark, and it only made the love songs Meath sang even more beautiful. The two met in 2013, and the rest is history.

They have released three albums and a variety of singles together, all of which are incomparably amazing. If you haven’t listened to Sylvan Esso, I highly recommend you check them out. Some of my favorite songs are “Radio”, “Die Young”, “Ferris Wheel” and “Rooftop Dancing”, but you can’t go wrong listening to them. Enjoy!

Enjoy what you read? Get Daily Cardinal content delivered to your inbox