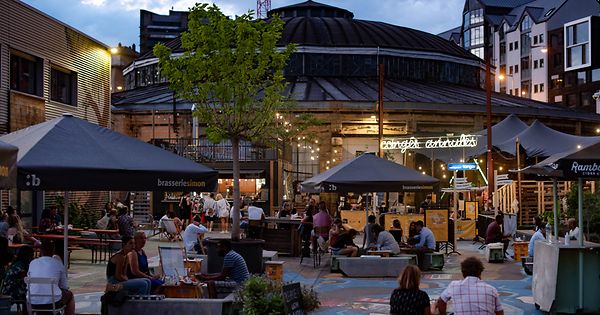 Luxembourg in August is lazy and some would say boring. With schools closed for the summer and many people traveling abroad for their annual vacation, the streets are deserted. Those who stay know that this period has hidden advantages: no traffic jams and no stress in the supermarket. And the Canceled Leave festival at the Rotondes.

A play on the expression cannual onge (annual leave), the Rotondes offer a festival rich in music every summer. Those who choose to cancel their August holidays have known for a long time that Luxembourg is not boring at all. The venue’s relaxed courtyard becomes a festival ground, the perfect backdrop for late summer nights in the company of good friends.

The list of artists covers a range of musical genres, leaning more towards the interpretive spectrum and genre leap. The July 23 kickoff saw Afro-Caribbean dance group The Mauskovic and techno-afro-jazz inspired drummer Bothlane set the tone for a month of musical and creative freedom.

Upcoming highlights include Dutch electronic music from De Ambassade, reinforced by the performance of local acts Von Kübe and NBLR. German group International Music takes audiences on a psychedelic rock journey, with music that, as they proclaim themselves, sounds as if the Beatles sought inspiration from India and the Scottish bagpipes.

Freelance singer-songwriter Gruff Rhys presents his seventh solo album In search of new gods, a musical memory of an ancient volcano on the Sino-Korean border believed to hold mystical powers. Exploring the no-man’s land of post-rock and post-punk infused with a bit of jazz, debut band Black Country, New Road is anything but conventional and will leave you in the dark.

Hailing from the dark corners of Toronto’s DIY music community, art-rock band Deliluh forged their own path to fame through concerts in random public spaces such as veterans halls, bakeries and libraries. With three vinyl records and a constant string of performances on the books, they now take their music to the not-so-random space of the Rotondes.

German singer-songwriter Stella Sommer, with the support of Hannah Ida, performs her second solo album in English, Northern dancer. Creating a genre of its own, Sommer’s music sits somewhere between 60s folk, song and pop, and filled with warmth and grace.

Straight out of the Geneva underground club scene, Ethyos 440 will take you by the hand and lead you to the dance floor. Their late-night dub-mix leaves no one behind. German duo Sheebaba, with The Cookie Jar Plot, are experts in creating live performances and their music will take you on a journey through independent sounds and raw lyrics.

The music of the Baltimore Horse Lords Quartet is unlike anything you’ve heard and the best way to listen to it is to get rid of any expectations of what the music should sound like. Just swing for fun. To wrap up the month-long festival, London-based Los Bitchos will take the stage on August 28. The group is the brainchild of four girls from Australia, Uruguay, Sweden and the UK whose music brings psychedelic garage punk to Latin American cumbia.

Find more information and the complete program here.
Doors open at 8:00 p.m. before the shows.
Tickets (around 5-15 €) at www.rotondes.lu or at the door.

Show your CovidCheck certificate (digital or paper) upon entry or take a rapid antigen test upon arrival.