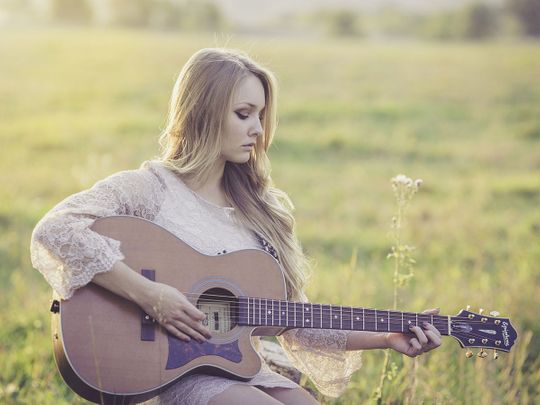 A cowboy is strumming a guitar in a field, and when he opens his mouth to sing… you’ve probably guessed the musical genre his song will fall into: country music.

Click start to play today’s crossword puzzle, where you can identify famous musicians and songs of this genre.

The idyllic image of a singer in the countryside is actually quite close to the origins of country music, which began in the United States. The English, Scots and Irish who settled in the Southeastern United States brought with them folk songs, many of which were adapted in the 1800s to suit the new rugged land they called their home. Initially, this kind of music was called “hillbilly” music, for the hilly lands that the new immigrants occupied. The songs were often passed down from family to family and friend to friend, and were a source of entertainment, with lyrics that told stories of joy, love, hardship, and trust in a Higher Power.

Cut to today, where country music struggles to compete with pop, hip-hop, rock, and electronic dance music (EDM). A 2015 study, published in the Netherlands-based journal Poetics, surveyed 2,250 Americans about 15 musical genres and asked them which genres they liked, disliked, or had mixed feelings for. The researchers then compared the results with a similar study carried out in 1993.

The study found that the appeal to most genres had increased, with only blues, reggae, show tunes, and rhythm and blues (R&B) showing no change. But country, bluegrass, and folk music all saw their appeal wane over the 20-year window of the study.

One of the reasons for the lack of appeal could be that country music has gotten too narrow, lyrically wise. According to the music news website Save Country Music, previous generations of country musicians, like Hank Williams, Johnny Cash, or Dolly Parton, wrote moving songs on topics that had universal appeal. Sorrow, love, devotion and hope are some of the common themes.

But newer styles of country music, like bro-country, which is influenced by hip hop, hard rock, and electronics, may have limited the genre’s experience to affirmations of rural life, lists. of country-isms and a vehemence for country living – something only people living in the rural southern United States can relate to.

Do you listen to country music? Play today’s crossword puzzle and let us know at [email protected]